A downloadable escape for Windows and Android

This is my entry for Mini Jam 104: Cascade

Goal of the game is to move forward while fighting of a horde of alien bugs and reaching a new highscore. Scorepoints are awarded for moving forward one tile, looting chests and killing alien bugs. Each time you move forward the previous row of tiles will vanish. The game is turn based so you can take your time carefully planning your next move. If you or the enemies start your turn standing on a burning tile you'll get hit for one damage.

Some of the graphics used are from game-icons.net.

I'll try to get an webGL version up and running in the next few days.

Update: I seem to use some code that just breaks the webGL player since every other platform runs fine. I'll try working on it but for the time being there'll probably be no webGL version of the game. If you would like to see linux/mac versions just leave a comment about it. Since I cannot test those platforms myself I'd rather not just throw something out there but if you want to test them yourself I'll build them.

Weapons: You have two weapons equipped, select one of them by clicking/tapping on the button shown below your health. Once selected the weapon range is shown on the board by red tiles. The gun can be reloaded if you find extra ammunition in one of the chests. All enemies have a knife equipped.

Movement: You can move one tile at a time, either forwards, sideways or diagonal. Click/Tap on a tile to move there.

Utility: You can find extra ammunition or healing items. Ammunition reloads all three shots of the pistol, healing items restore one heart each. You can only carry two of each type of utility at a time.

Enemies: All enemies are equipped with a knife and one action point. They move one tile closer to you on their turn. If you end your turn in their weapon range they attack for one damage.

Hazards: Some tiles are burning and inflict one damage to any character starting their turn standing on the tile. During the enemy turn fire can spread to neighbouring tiles.

Chests: Click/Tap on a chest in movement range to open it. Each chest has a 1:5 chance of an utility item. You can not loot chests on a tile with an enemy. 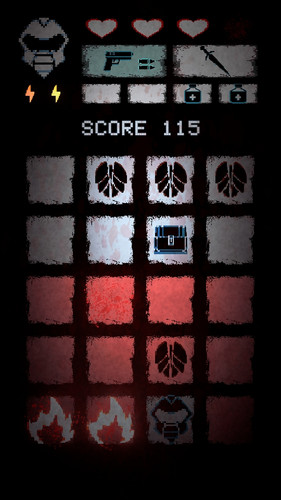 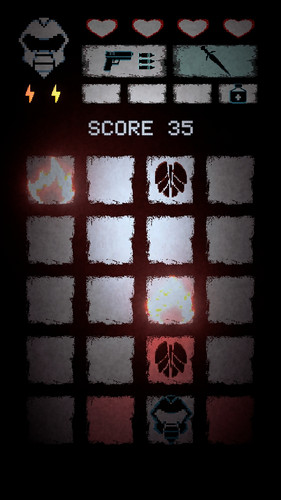 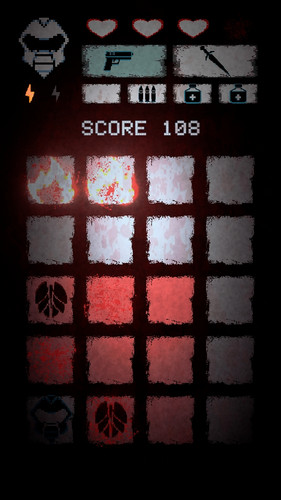 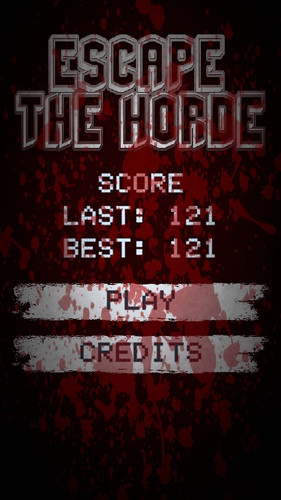