Castle Siege is my entry for Kenney Jam 2021

Defend your castle against hordes of monsters by rotating the map tiles to your strategic advantage.

Each hero is strong and weak against a type of monster. Rock-Paper-Scissors

Sadly due to the time constraint I wasn't able to put sound or music into the game.

Click / Tap on a hextile to select the ring it is on. With the white arrows on the left and right side of the screen you can rotate the whole selected ring by 60 degrees to either side.

Click / Tap on the castle in the middle and choose a type to summon from the menu above the castle. To cancel just click anywhere else.

After choosing a type to summon place it on a hextile. To cancel Click / Tap the castle again.

Windows / WebGL : right click on the hextile you want to place the hero on.

Android: tap and hold the hextile you want to place the hero on.

Units, shows the strengths and weaknesses of the different unit types. To go back Click / Tap anywhere.

The white bars in the upper right corner open the menu back up.

End Turn progresses the game to the next turn.

Hero tokens, shows the number of available heroes you can place.

Each turn enemies appear on the edge of the map. The red hextile next to an enemy shows where it will move next. Place heroes on the map to fight the enemies. If there is a hero on an adjacent hextile next to an enemy, the enemy will not move between turns and instead fight the hero. Multiple heroes/enemies can fight with each other. If an enemy reaches the castle in the middle and there is no hero next to the enemy, the enemy will attack the castle. The game ends when the castle lost all of its 6 hitpoints. After placing your heroes and rotating the map, Click / Tap end turn to continue. 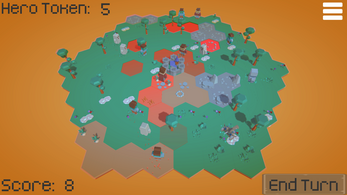 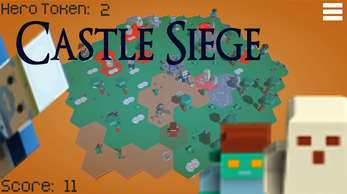